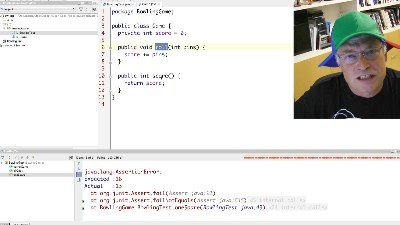 There was just so much Uncle Bob had to say about TDD that he needed two episodes to say it. This is part one.

This episode begins an epic debate between the vanguard of craftsmanship and the mirror forces of traditional development. The gauntlet is thrown when Uncle Bob describes the real reason that code rots over time, and how that rot can be prevented and even reversed by a comprehensive suite of tests created through the discipline of Test Driven Development.

The mirror forces rise to the challenge and demand answers to the traditional and entrenched objections that have, for years, convinced them that TDD is a discredited and vacuous doctrine. Uncle Bob describes what TDD is and how it works before he tackles the objections directly. The mirror forces are restive, but agree.

After a brief time-out, during which Uncle Bob describes the origins of the Moon, he dives into the argument for tests. He talks about why code really rots, and what happens when it rots too much. He talks about the failure of big cleanup projects, and how development teams are often dominated by the fear of changing the code. "Code rots", he says, "because we are afraid to clean it."

Next, Uncle Bob dives into the three laws of Test Driven Development—the central discipline of TDD. He describes each of those laws in turn, and answers the brief objections raised by the impatient mirror forces. Then Uncle Bob describes the benefits of following those three laws: the reduced debug time, the production of reliable low level documentation, the decoupling of the design, and the elimination of the fear of change.

Finally, in the face of rising skepticism and impatience from the mirror forces, Uncle Bob finds a messy function in an open source project that is covered by tests, and proceeds to clean it fearlessly. The results are impressive, and the mirror forces hold back their ire to await the promised debate.

Here endeth the lesson, or at least part one.