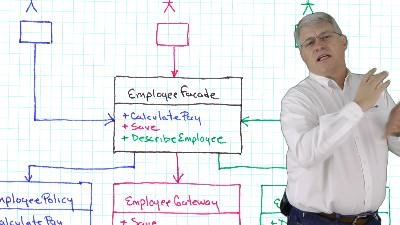 In this video, Uncle Bob will take you on a deep dive through the Single Responsibility Principle. After a little General Relativity, you'll learn just what a responsibility is, and how it relates to the users of the system and the roles that they play.

You'll learn about the primary value of software, and why that value is not what you'd expect. You'll also learn how the proper allocation of responsibilities to modules impacts that value and means increased profits for your business.

Uncle Bob will teach you how misplacing responsibilities can lead to design smells like Fragility and Viscosity. He'll show you the importance of separating responsibilities into different functions, classes, and modules. And he'll demonstrate different techniques for achieving that separation.

Next, he'll walk you through several different Java functions and ask you to find the single responsibility violations. Then he'll show them to you and recommend ways to separate them.

Finally, he'll walk you through the case study of a simple application, from inception to delivery. He'll show you how to find the responsibilities, and, following the principles of architecture from Episode 7, how the system can be designed so that those responsibilities are separated. He'll also show you where to get the code so you can study it later.

So get yerselves saddled up and rarin' to go because y'all're 'bout to stampede into The Single Reponsibility Principle. Yee Haw!