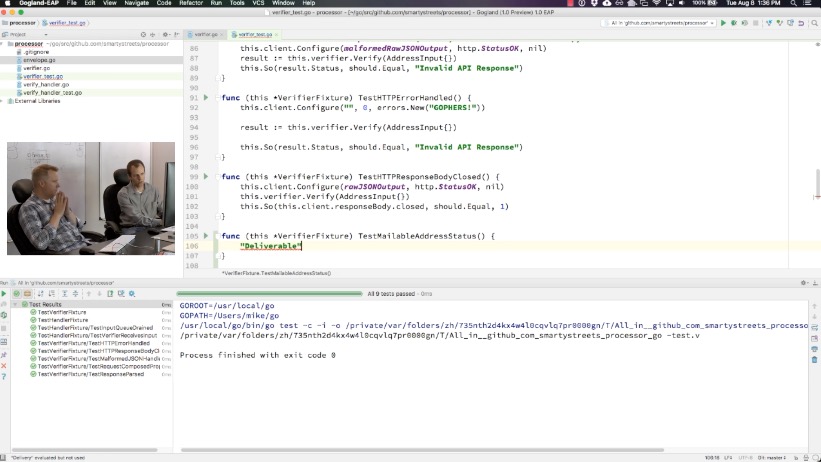 A ton of interesting stuff happens in this episode.

First, having finished the request and the response, the team is now ready to deal with the "gold"—the analysis of the response. This, it turns out, is just an interesting problem of combinatorial logic.

At first this logic goes as you might expect. But, then something fascinating happens: the team starts to refactor the tests. And, as they clean up the tests, they find that it's easier to write more tests. As more tests are written, they find that it's easier to clean up the production code, which allows even more test cases... This is a lovely example of the positive feedback of TDD/Refactoring.

And then, in the third tomato, Jonathan gets a text and has to leave to go to a meeting (he is the CEO after all). Mike could continue without him—there's no rule against that—but instead, he decides to take the opportunity to teach someone who is less experienced with the language.

Now, watch how everything changes: Mike goes from aggressive collaborator to patient teacher. Cami's no slouch. She revs up to speed pretty quickly. Still, Mike is much more experienced. So the gentle teaching continues as the pace increases.

Watch how this affects Mike's code: it becomes more deliberate, more explanatory, and even cleaner than before. The act of teaching improves the teacher!