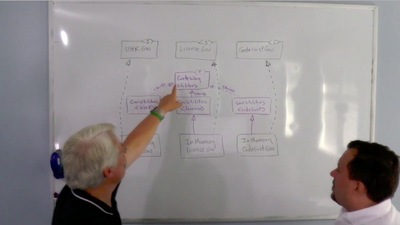 "No, not yet. Let's do this later in the episode."

"No, not yet, let's do this later in the episode who?"

In this episode we change directions entirely, and we announce a contest!

The episode begins by reviewing a big refactoring that Uncle Bob did offline. It's pretty cool, and you aren't going to want to miss it.

Then we announce the contest that you can participate in (see below).

Then we take the whole project in a brand new direction. We begin to write our own simple web server. We got frustrated looking at all the other web servers out there, and decided it would be a better use of our time to write our own.

Have you ever written a web server? It's simple and fun! Watch how we do it here, and listen to the rationale we present.

And then enter our contest...

Please submit a video demonstrating how you would have executed the refactoring that Uncle Bob did. Show it step by step, and keep all tests passing for each step.

Put your video into a dropbox or something similar, and send a link to contest@cleancoders.com.

Micah and Uncle Bob will review the videos and select their favorites to be shown as part of an upcoming episode. We reserve the right to edit any videos we present.